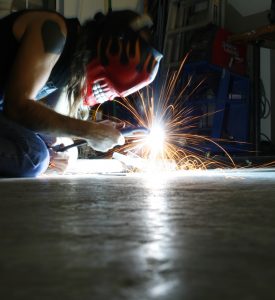 Sean Sobczak’s second life began late in the summer of 2001, after attending the Burning Man festival for the first time.  The boundless creativity he experienced that week redefined art for him, opening a door through which he plunged head first.  He returned to Los Angeles and began working on his first sculptural creation: a six foot tall, glowing seahorse which would be the cornerstone of an elaborate mobile installation for the next summer’s festival.

Metal sculpture became his medium, and the alien worlds of plants, insects and ocean life provided a deep well of inspiration for his early work.  Through a combination of steel wire, imported fabrics and various types of internal illumination, he used delicate curves, rich textures and warm colors to infuse his pieces with a gentle, dreamlike surreality, encouraging the viewer to rediscover these wonders of nature with a sense of childlike awe.  His projects from this period culminated in a second large scale mobile installation, this time centered around a twenty-five foot long two-headed dragon.

Still fascinated with light, Sobczak began experimenting with shadow play.  The Convergence Series is a collection of organic and geometric shaped sculptures that, while internally illuminated, also cast fantastic light and shadow arrays.  These pieces are colorful and visually appealing during daylight hours, but come to life in unexpected ways at night, incorporating the entire wall or ceiling into the piece.

As his technique has progressed in recent years, his focus has been shifting away from lights and fabric and towards more complex pieces with exposed wire work.  Having completed a short series of sculptures incorporating repurposed circuit boards from broken electronics, he then spent sixteen months working on his most intricate and detailed piece to date: a life-sized nude composed entirely of patinated steel wire, entitled “Shake Dreams From Your Hair.”

Well known in the L.A. underground, Sobczak’s sculptures have been in numerous venues and events in and around Los Angeles.  In addition to Burning Man, his work has been shown at other large west coast festivals including Coachella, Lightning In a Bottle, Dark Skies and The Electric Daisy Carnival.  His work has also been shown at corporate and benefit events, more traditional art venues and in the pages of Make Magazine and the Los Angeles Times.